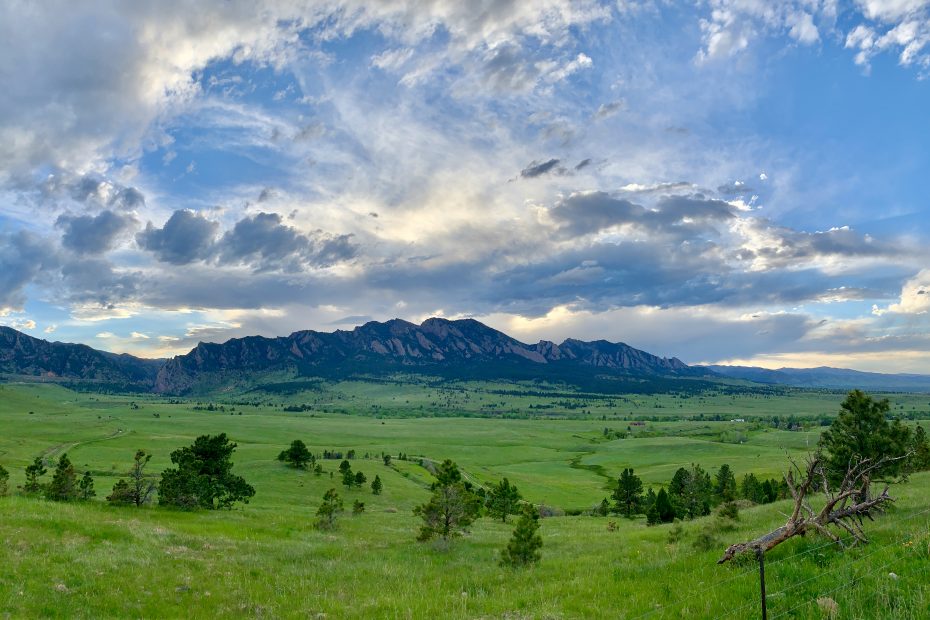 As Boulder and the world seek to recover from the economic and social hardships of COVID-19, it is useful to be reminded about the source of our wellbeing and prosperity. The following article, by economist and historian Deirdre McCloskey, was originally published in Discourse, an online journal of politics, economics and culture.

The Great Recession of 2008, and now the Greater Recession, might distract you from the vastly bigger story of our times: the Great Enrichment, from 1800 to the present. But as we try to restart the economy battered by governmental failures, we need to keep in mind what has been gained.

As more than one historian has pointed out, poor people in the United States and other developed countries live better than 18th-century European monarchs. Today, supermarkets and other stores are stocked with an ever-growing variety of goods, lifespans have been extended by decades, and (in the past 40 years alone) billions of people have been lifted from poverty. These are just some of the amazing achievements that have come about as the result of the Great Enrichment, a flowering of opportunity and economic growth unparalleled in human history.

Freedom and Innovation Cause the Great Enrichment

But this enriched modern economy is not a product of state planning or coercion. Instead, it came about as the result of the happy chances of a change in political and social rhetoric in northwestern Europe from 1517 to 1789. People—regular people, the hobbits of the Shire and not the almighty warriors from afar—began to perceive themselves in a new and dignified light. Perhaps most crucially, they came to feel their artisanal and commercial undertakings to be more appreciated socially. They were permitted to “have a go,” as the British say, and proceeded then to innovate on a massive scale.

Our dear friends far to the left who admire Cuba, North Korea, and Venezuela stoutly resist the sad facts of political economy. They resist actual history in favor of the theoretical claims of historical materialism. Yet the facts have turned out as follows: statism on the whole impoverishes. Liberalism on the whole enriches.

Two centuries ago an entirely new politics was born. Tentatively, in the 18th century, at first exclusively in northwestern Europe and its offshoots, the new philosophy of liberalism began to speak in earnest of political egalitarianism and adult empowerment. It was a curious result of a long series of liberating accidents, including Luther’s 95 theses in 1517, the Dutch Revolt in 1568, the English Civil War of 1642, and the English, American, and French revolutions of 1688, 1776, and 1789, respectively.

The word “liberal” derives from Latin liber, meaning—reports the Oxford Latin Dictionary—“possessing the social and legal status of a free man (as opp. to slave).” Under true liberalism no adult is to be treated as a slave or a child—at least in theory, a theory slowly and unevenly implemented. In the 19th century a European asked a free American man who his master was. He replied, “He ain’t been born yet.”

In 1935, the Black poet Langston Hughes, admittedly no 19th-century liberal, expressed the core of liberalism well:

“O, let America be America again—
The land that never has been yet—
And yet must be—
the land where every man is free.”
~ Langston Hughes

The Invisible Hand of Freedom

Liberalism flowered in the 75 years after 1776—as much from the liberal theory, with factual illustrations, published on March 9 of that famous year, An Inquiry into the Nature and Causes of the Wealth of Nations, as from the practical consequences of the soaring rhetoric, published on July 4, penned by a slave owner in the opening lines of the Declaration of Independence. Such ideas led gradually in more and more places to the liberation of a reformed electorate: liberty in Britain and the US for improvers and entrepreneurs; then liberty for Catholics and Jews and other nonconformists; then freed slaves in the British Empire and serfs in far Russia; and then gradually others, such as women, poor men, immigrants, imperial subjects, and homosexuals. It was well said that in the 18th century kings had rights and women had none; now it’s the other way around.

The emancipations were often confined to the economy, as in Bismarck’s Germany or in China since 1978. The people sacrificed their political liberty more or less gladly in exchange for their economic liberty. In the better cases, such as liberal, unified Italy before the fascist era or Chile through more of its history than many realize, and especially in the heartland of liberalism in the Anglosphere, emancipation was achieved in both the economy and the polity.

Freedom Unleashes a Tsunami of Innovation

The emancipation, partial though it was, after 1800 caused a tsunami of innovations, still washing over the world. The usual explanations for the tsunami are mistaken. It was not expanded foreign trade, accumulated capital, splendid public works, the exploitation of slaves and workers, or even high science in the past two centuries that caused what can only be called the “Great Enrichment.” The enrichment greatly exceeded the oft-praised (or damned), but in truth somewhat routine, Industrial Revolution (1760–1860).

The Great Enrichment came from human ingenuity emancipated. Ordinary people, emboldened by liberalism, ventured on extraordinary projects—the marine chronometer, the selective breeding of cotton seed, the band saw, a new chemistry—or merely ventured boldly to a new job, the New World, or going west, young man. And, crucially, the bold adventurers, in parallel with liberations in science, music, and geographical exploration, came to be tolerated and even commended by the rest of society, first in Holland in the 17th century and then in Britain in the 18th. Ethical ideas about other people changed—for reasons one can trace to the liberal accidents of the two centuries since 1789 in northwestern Europe—and caused the modern world.

The novelties thus encouraged by liberalism began to raise living standards, at first doubling in Britain between 1760 and 1860, and then at length raising Britain and then the world to a level never yet seen or anticipated. You will ask, being a proper skeptic, what level “never seen or anticipated?” We answer, along with all competent students of the matter, the Great Enrichment from 1800 to the present raised real income in a rapidly expanding number of countries by a factor of 10, 30, or 100. And contrary to present-day hobgoblins described on TV and in newspapers, and calling il populo to arms, it shows no sign of slowing worldwide. It was and is stunning.

It’s not a factor of 1.5 or 2.0, understand—not 50 percent or 100 percent, which had happened before, here and there, such as in the classic Industrial Revolution. Earlier “efflorescences,” as the historical sociologist Jack Goldstone calls them, had always reverted to the miserable base of 1.0. The base in 1800 worldwide was, expressed in present-day prices, an appalling $2 or $3 per person per day, which had been the human and Malthusian fate since the caves. Imagine living in Milan or Chicago on $3 a day. In Sudan and Ecuador, many still do.

Yet now in places like Finland or Japan, once unspeakably poor people make and consume, in the same prices, $100 a day and higher. The rise in the liberal nations has been a stunning 3,000 percent at the least—or if one allows properly for improvements in quality, such as better medicine and better housing (and for that matter, better economics), more like 10,000 percent. A factor of 100. Goodness.

The Poor Benefit the Most

And the poor have benefited the most. A rise of 3,000 percent, not to mention 10,000, blots out the important gaps in real comfort between peasant and aristocrat, gaps which before 1800 were the norm. Inequality was greatly reduced by liberal “innovism” (the word is much more to the point than the hugely misleading word “capitalism”). The rich woman got another diamond bracelet. The poor woman got enough to eat.

Innovism Elevates the Most Impoverished

In 1800 in Northern Europe, only rich people could eat oranges, grown in the well-named orangeries back in the hothouses of their ample homes. Now oranges appear on the breakfast tables of the poor, and scurvy is banished. Half of national income in medieval Europe went to owners of land. Now it is one-twentieth. Contrary to recent pessimisms, from Thomas Piketty to Robert Gordon with their encouragement to statist and populist panics and policies, growth will continue. In the next half century or so, liberal innovism—not state planning—bids fair to raise up the wretched of the earth.

Wealth Then and Now

Courtesy of the Maddison Project, here are the rough summary numbers for some representative places, about which all students of the matter pretty much agree, with the factors of growth over the past two centuries, the implied total percentage changes, and the implied annual rates of growth.

Observe that when the average includes very poor counties, such as North Korea (unlike its sibling to the south), Zimbabwe (formerly the richest country in sub-Saharan Africa), or Cuba (with no growth since 1959), the rise has still been a factor of 16.5 worldwide, itself startling. Doublings, 100 percent rises, were rare but not unprecedented in olden times, such as in Rome under the Antonine emperors or in China during the Song dynasty. But rises of 1,550 percent, not to mention 4,900 percent, were unheard of.

The Great Enrichment is the second-most-important secular event in human history. (The domestication of animals and especially of plants was the first, yielding cities and literacy.) The growth rates of 1.4 and 2.0 percent since 1800 sound small. But compounded year on year over a century or two, they have been transformative. Something growing at 2 percent a year will in a century increase by a factor of about eight.

Flourishing Future for All

On present expectations by the World Bank, the recent level of 2 percent growth of real income per year per head worldwide (COVID-19 excepted) will in a few generations—if the virus, pollution, war, and tyranny do not intervene—bring everyone on the planet to a level of prosperity well above that enjoyed now in Western Europe.